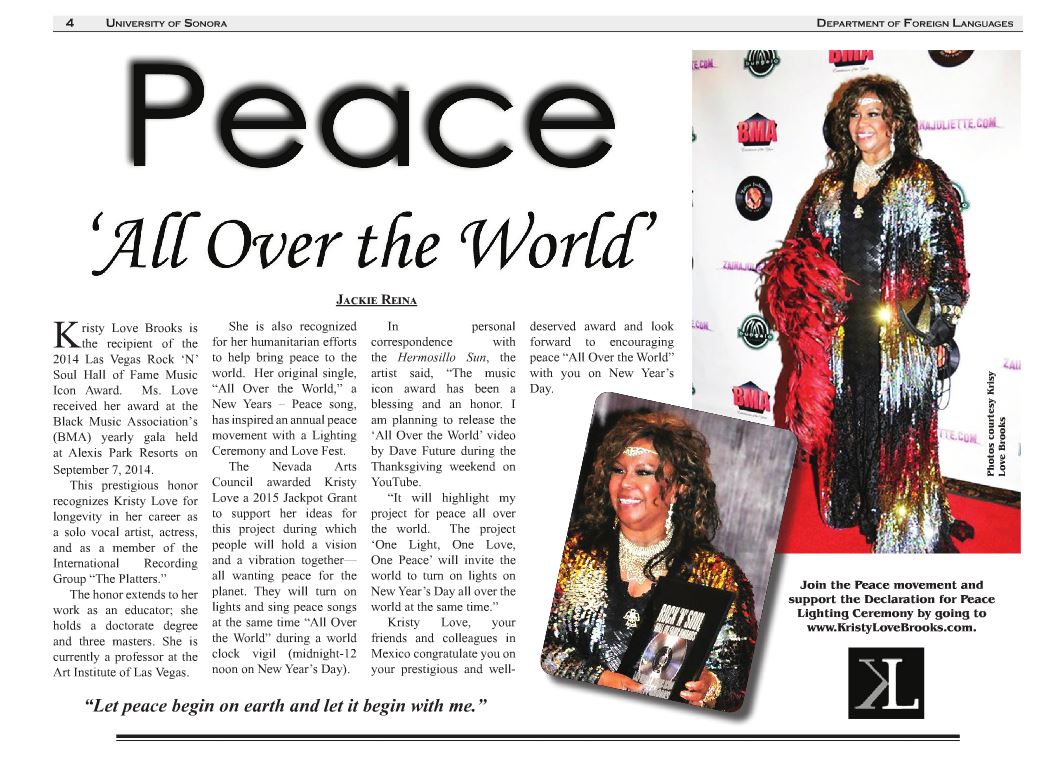 “Get Kristy Love!” – Las Vegas Weekly Magazine
Standing out among three brown velour-suited male singers is the lady from Detroit, resplendent in a gold and red lamé jacket over black skirt, with an equally impressive name: Dr. Kathleen “Kristy Love” Brooks. After blending into the harmonic splendor of “Smoke Gets In Your Eyes” and “Twilight Time,” the Platters’ finest dish launches a Mahalia-meets-Aretha solo on a gospel-dipped “Someone To Watch Over Me,” then sings lead on an ecstatic “Will You Love Me Tomorrow” that ratchets up the audience to an on-its-feet fervor.

Soprano Kristy Brooks, the only female in the show, hit a stately stride on Carole King’s “Will You Still Love Me Tomorrow” and The Platters basked in well-deserved applause.

Jump back to the fifties when songs held meaning, music had rhythm and the singers produced the greatest harmony on earth…You’ll relive the romance and walk down memory lane with the most loved songs this world has ever known.

Kristy Love has established herself as one of the worlds true “Divas”.

She is a former RCA recording artist, and she has released several groundbreaking independent albums including: For Lovers Only, Kristy’s Classics Vol. 1,and a children’s album titled With a Child’s Heart. Her CD “Giving You Love” received rave reviews overseas in Britain and the United Kingdom. She performs her solo act with tributes to the original “Divas” including: Roberta Flack, the Motown Divas, Aretha Franklin, Gladys Knight, Whitney Houston, Yolanda Adams and more.

Known as an entertainer extraordinaire, she has performed as a solo vocal artist, actress, and dancer. Her special gifts and talents are displayed through her vocal and acting performances in which she brings the gift of love and touches the souls of her audience.

Singer-songwriter Kristy Love Brooks is no stranger to the limelight. She’s a seasoned performer and all-around entertainer, known for being a solo RCA recording artist, actress, and dancer singing along with one of the most successful R&B groups, The Platters, with an established fan base in the United Kingdom. She is, in the eyes of many, a true diva with her reputation in the music industry.

With glitz, glam, and passion Kristy Love Brooks, self-proclaimed Diva, has released her album Song of Love and Peace. Brooks goal is to spread the virtue of “peace” through her music with the single “All Over the World.”  She has graced the world of entertainment in various ways from acting, singing, song writing and dancing.

Kathleen “Kristy Love” Brooks has been singing for decades, and has release several independent albums, such as For Lovers Only, Kristy’s Classics Vol I. and a children’s album titled With a Child’s Heart.  While her name might not be as well known as Gladys Knight or Roberta Flack, her voice definitely parallels these legends. On two of the first singles off the album, “All Over The World” and “Certified,” you ger a good sense of the cariations in Love’s voice. As a singer-wongwriter, Love is a lyicist and while there isn’t anything particularly “new” about her sound, what you’ll appeciate on this record is her lyrics. They’re heartfelt and genuine, like what R&B used to be. “All Over The World” is a dance-infused track with an uptempo beat, while “Certified” is a slow jam a la Quiet Storm radio. Overall, this is one album that’s worth checking out.